Even if a couple haven’t yet tied the knot, a diamond ring on the fourth finger of a woman’s left hand is a clear statement that she is off-limits to other men, pending the coming marriage. But the conventions weren’t always the same; the symbolism behind the tradition of the engagement ring runs deep, and the practice has changed extensively through the centuries.

Instead of the precious metal and gemstone combination so popular today, the Romans would mark an engagement with a simple iron ring called the ‘anulus pronubus’ (‘betrothal ring’) – iron’s durability signifying enduring love and the permanence of the marriage.

As time went by, these rings were more commonly made from precious metals and grew more ornate, with engraved designs like keys, intertwined hands and other motifs – an ancient form of bespoke jewellery.

Increasingly, the value of a ring was intended to indicate the groom’s financial commitment and sacrifice to the bride – in fact, in the ninth century Pope Nicholas stipulated that an engagement ring had to be made of gold, though precious stones were unusual at that time. 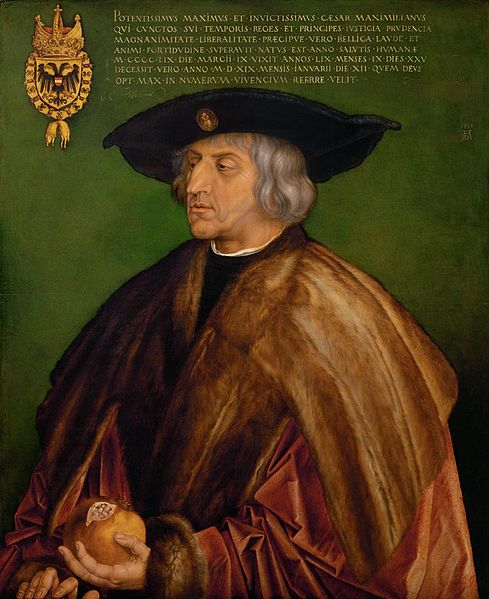 In 1477 Archduke Maximilian I of Austria (shown here in 1519 in a portrait by Albrecht Dürer) brought the diamond engagement ring to worldwide prominence by giving one to his new fiancée, Mary of Burgundy. Like the Romans’ iron rings, the diamond’s hardness was linked to the idea of undying love, but due to their rarity only the very wealthy could afford them and the idea of diamond engagement rings was slow to catch on until the 19th century, when new mines in South Africa made the stones available to more people.

In the meantime, other adornments such as pearls were used more frequently than they are today, though bespoke engagement rings are still often likely to have opals, emeralds and other gems.

The fourth finger of the left hand is associated with love and marriage in many cultures, partly because the vein in the ring finger (the ‘vena amoris’ or ‘vein of love’) was thought to be connected directly to the heart – a belief that originated from earliest times, possibly in Ancient Egypt. In the medieval Christian tradition, at the betrothal ceremony the priest or groom would place the ring on the index and middle finger before the ring finger, saying ‘Father, Son and Holy Spirit’ as he did so.

However, it wasn’t until 1549 that the Book of Common Prayer specified that the ring should be placed on the left hand (though which finger wasn’t specified, leading to some flexibility – some people even opted to place it on the thumb).

Even now, in some European cultures – particularly Scandinavia and Eastern Europe – the ring tends to be worn on the fourth finger of the right hand. Occasionally, as in the Greek Orthodox tradition, it even starts on the left hand at engagement and is moved to the right at marriage.