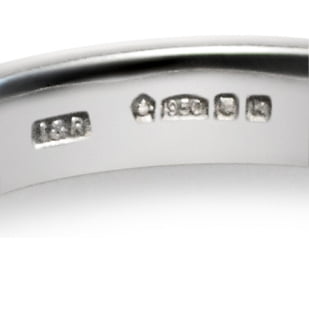 Examine any item of precious metal carefully, and there’s a good chance you will find a series of symbols stamped onto it. To the uninitiated, these marks might as well be Greek, but once you understand them, they can tell you a great deal about the item you are holding.

The first thing to remember is that hallmarks and trademarks are not the same thing. Hallmarks guarantee that the metal – generally gold, silver or platinum – is of a certain quality or fineness, determined by metallurgical testing or ‘assay’. Trademarks, on the other hand, are a maker’s mark – the smith’s way of claiming credit for his skills.

Different countries have different systems of hallmarking, determined by law (though some have none). In the UK it is a legal requirement that all fine jewellery be hallmarked.

A history of hallmarking

There is evidence for rudimentary hallmarking dating back to the early centuries of the first millennium. However, it wasn’t until the middle ages that a degree of coherence (and bureaucracy) was brought to the process and local government took an interest in ensuring the quality of metalwork produced within its jurisdiction by means of authorised ‘assayers’, who would inspect gold and silver goods on behalf of the king before they could be sold.

The first hallmarks as we would understand them originated in France in the 13th century, with England first enacting its own laws in 1300.

Assayers would confirm that an article contained the minimum requirement of pure metal (initially, silver) by marking it with an image of a leopard’s head – though precise standards could not be determined due to the limitations of assaying techniques at the time.

As time went on, each goldsmith or silversmith was given responsibility for guaranteeing the quality of all the metalwork that was produced in his workshop, which typically took the form of a set of initials, a coat of arms, or both. The word ‘hallmark’ derives from Goldsmiths’ Hall in London, where the Worshipful Company of Goldsmiths have their headquarters.

Maker marks – an early example of corporate logos – were introduced halfway through the 14th century, with a date-letter system following in the 15th century, meaning that any piece could be dated at a glance.

Despite the clear advantages of having one unified international set of hallmarking conventions, no overarching standard exists and so it is important to know the originating country of any jewellery or other works of precious metal (signatories of the Vienna Convention may include additional marks, which signify standards of international conformity). In the UK, for example, silver often has four marks on it: a symbol for the originating town, a guarantee of quality, a maker’s mark and a date letter.

Full standardisation is unlikely in the short term, because quality control varies so widely (and different countries may be more or less efficient in terms of enforcing these standards). Even the definition of a precious metal is debated; for example, some countries require hallmarks for palladium, whereas others do not.