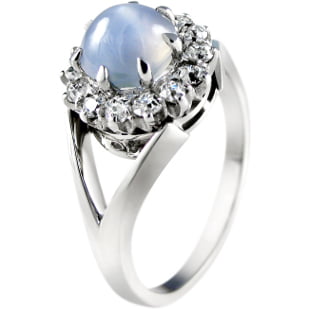 We recently had the pleasure of making a beautiful bespoke engagement ring for Joe Cripps and his fiancé Louise. The central star sapphire and surrounding diamonds were taken from a tie pin which had belonged to Joe’s great grandfather, the politician Sir Stafford Cripps. Sir Stafford, a member of the War Cabinet under Winston Churchill, was best known as Chancellor of the Exchequer in Clement Atlee’s government in the late 1940s.

In the early 1940s Sir Stafford was sent to India to negotiate an agreement that would maintain India’s support for the British war effort. He returned to India a few years later, when he was involved in the discussions that preceded Partition. It was while he was in India that he was presented with the tie pin which decades later would be transformed into Louise’s engagement ring. Congratulations Joe and Louise!