In 1998, Global Witness released a report that exposed the role of diamonds in funding civil war in Angola.  Five years later, in 2003, United Nations General Assembly Resolution 55/56 introduced the Kimberley Process Certification Scheme (KPCS), with the aim of preventing ‘conflict diamonds’ from entering the mainstream market.

Throughout the world, the “Kimberley Process Certified” stamp of approval has been seen as a guarantee of a conflict-free past, offering consumers a standard with which to judge the ethical credentials of a diamond prior to purchase. However, in late 2011, Global Witness pulled out of scheme, branding it “an accomplice to diamond laundering”. One of the key reasons for Global Witness’s departure has been activity around the Marange diamond fields in Zimbabwe over the past few years, where an explosion of diamond production has been accompanied by increased levels of violence and intimidation orchestrated by a corrupt political and military elite. Since this conflict does not involve warring rebel militias, the KPCS considers Zimbabwe diamonds to be conflict-free.

To educate a wider audience on the problems with the Kimberley process, Ingle & Rhode has created an infographic that explains to ethically minded consumers, in an easy to consume format, why simply having a Kimberley Process certified diamond is not enough.

“It is important that consumers are aware that Kimberley certification does not guarantee that a diamond is conflict-free. In order to know whether a diamond has been ethically produced you need to be able to trace it back to it source.”– Tim Ingle, Ingle & Rhode 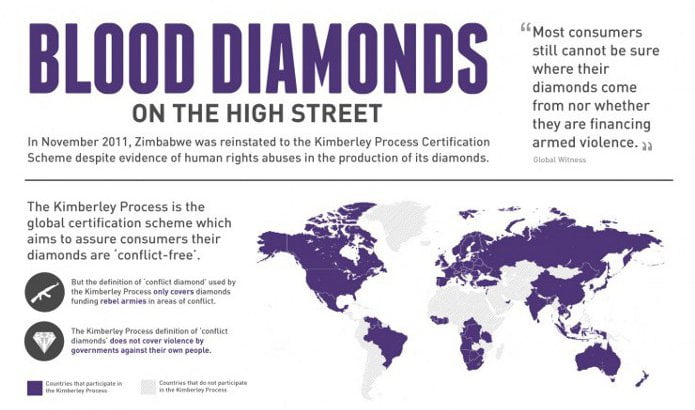 To help us spread the message about KPCS and the terrible plight of the workers in the Marange mines, please feel free to take this graphic and embed the content on your own site or blog.

To build this graphic, Ingle & Rhode sourced data about diamond production increase in Zimbabwe and looked at some of the political ramifications of the increase in state revenue. As a consequence of corruption, bribery and high taxation, Robert Mugabe’s brutal Zanu-PF regime stands to personally gain 60 million US dollars – most of which will likely go to fund the continued repression of free-speech, state sponsored violence and the intimidation of political opponents.

For more information about diamond trading and the ethical ramifications of corruption in the mining industry, please look through the following websites.