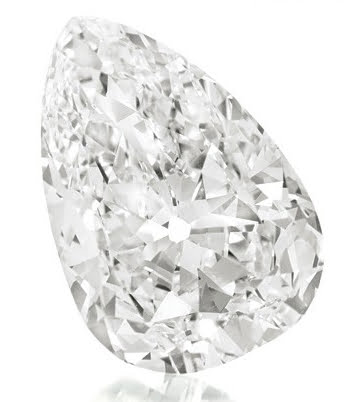 A stunning pear-shaped 39-carat diamond known as the Evening Star has been sold in an auction at Christie’s for $5.4 million. With an estimated value before the sale of between $3.6 and $5.5 million, the final bid indicates that although the price of smaller diamonds remains relatively stable, the market is strong and larger stones are selling at the upper end of their valuation range.

The D-colour diamond, which has been certified to VVS1 clarity, was part of a private ten-piece collection which was sold straight after the New York Jewels Sale on December 10.

Origins of the Evening Star Diamond

The Evening Star takes its name from its former (and unknown) owner’s practice of wearing the stone to galas and evening events. The diamond comes from the Golconda mines, west of Hyderabad in India, which have yielded some of the largest stones in the world. For a time towards the end of the 19th century, ‘Golconda’ became synonymous with any prolific mine or source of exceptional wealth, akin to El Dorado.

Other stones to hail from this mine include the Darya-e Nur (‘Sea of Light’), a 185-carat pale pink diamond which forms the largest of the crown jewels of Iran. Another, the Hope Diamond, is a blue, cushion-cut stone of more than 45 carats.

The full collection sold at Christie’s comprised a number of rare items of bespoke jewellery. The owner often displayed the Evening Star as the pendant on a necklace of 68 pear-shaped diamonds, set in platinum. The necklace was sold as a separate item. A pair of matching earrings with pear-shaped stones of 10.21 and 10.51 carats completed the set and sold for $2.1 million. The earring stones and the Evening Star itself are type IIa diamonds, possessing exceptional optical clarity and giving them a soft, luminescent quality.