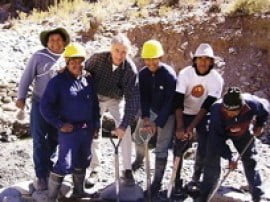 Recently a representative from Ingle & Rhode visited several alluvial mines in the Jujuy province of Argentina – that’s up north, close to the high Andes at 12,000 feet and light years away from the glamour of a fine jewellery showroom. This was a chance to talk to the miners directly, share their lives briefly, and meet members of the EcoAndina foundation – a United Nations and NGO-funded mining operation which uses the ‘green gold’ trade to fund sustainable villages and support the local communities of the Puna plateau.

In the village of Misa Rumi (a dusty collection of houses, a church and a dirt football pitch) ‘Ingle & Rhode’ met Santo Martinez, 48, and his son Julian, 26. They had come to sell their gold to the EcoAndina Foundation.Santo and Julian work as a family group and split the proceeds. They know all about the value of their gold and have the option of selling to various traders, but they said they prefer to deal with EcoAndina. This is not just because they get a good price, it’s also due to the foundation’s involvement in several projects that are essential to the survival of their village.

The village just about exists. Llamas and goats are important; jobs pretty non existent; government social security is only £30 per family per month, so the cash from gold is important to keep the village viable. EcoAndina are also involved in providing solar power, and environmentally friendly agriculture – sustainable villages are their aim, not desolation and the human tragedy you see every night in the doorways of Buenos Aires.

And so to the mines … These are a hike away in the bottom of a dried up gorge. The Martinez family workings are in a patch of river bed 6 yards wide by 30 long. At the gold-bearing layer the dirt looks pretty unconvincing – typical river deposits, rounded stones, grit and dirt. But a couple of shovel loads fill the pan, next they dip it in the water and start ‘gold panning’. First the stones are separated, then the lighter material is removed until after about ten minutes they are left with a little bit of mud in the bottom of the pan and perhaps … perhaps a tiny nugget of alluvial gold.

Large scale gold mining means stripping the land, crushing the ore, leaching out the gold with cyanide or mercury, and leaving behind poisoned and contaminated spoil. But all along the gorge at Misa Rumi small scale miners like the Martinez’s – proud self-employed groups of men, were washing out their gold, providing for their families and their communities.
Which gold would you prefer on your finger?