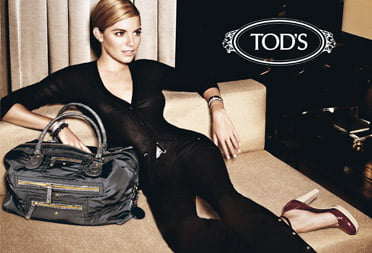 Of ten high-end brands surveyed in this week’s ‘Deeper Luxury’ report by the WWF, none scores higher than C+ for ethics. Singled out for special criticism are Italian jeweller Bulgari, and the accessory company Tod’s, endorsed by Sienna Miller.

Companies are graded for their “environmental, social and governance performance and reputation.” The grades are based on data from the analysts Ethical Investment Research Service (EIRIS), which uses company reports followed up with questionnaires, and from Covalence, a company that tracks brand perception through news reports.

The report will make ugly reading for Sienna Miller, who in the past has been quick to identify herself with environmental issues. It warns that Tod’s could be “a liability” to her reputation – according to WWF-UK senior policy adviser and report co-author Anthony Kleanthous:
“The world of celebrity leads by example and generates an aspirational desire for branded products. These stars have the responsibility to make sure that the brands they are endorsing are not damaging the planet.”

Within the jewellery industry, the report highlights the ongoing issues around conflict diamonds and dirty gold. It refers to a recent UK survey by Amnesty in which three quarters of retailers admitted to having no auditing process in place to combat the trade in conflict diamonds, and to which nearly a third failed to respond in spite of repeated requests.

The report also focuses on the environmental damage that often results from gold mining. It praises the ‘No Dirty Gold’ campaign run by Oxfam and Earthworks, which has helped to raise awareness of this issue, but concludes that “…much remains to be done in order to clean up the production and trading of gold and other precious metals.”

The report is likely to reinforce the growing demand from consumers for socially and environmentally responsible products. It should also alert the luxury brands that they can no longer afford to turn a blind eye to unethical practices. If they fail to pay attention the warning, they could face a difficult future. As Anthony Kleanthous points out, “Let’s face it, who wants to pay extra for a dirty brand?”

The Council for Responsible Jewellery Practices has strongly criticised the report.