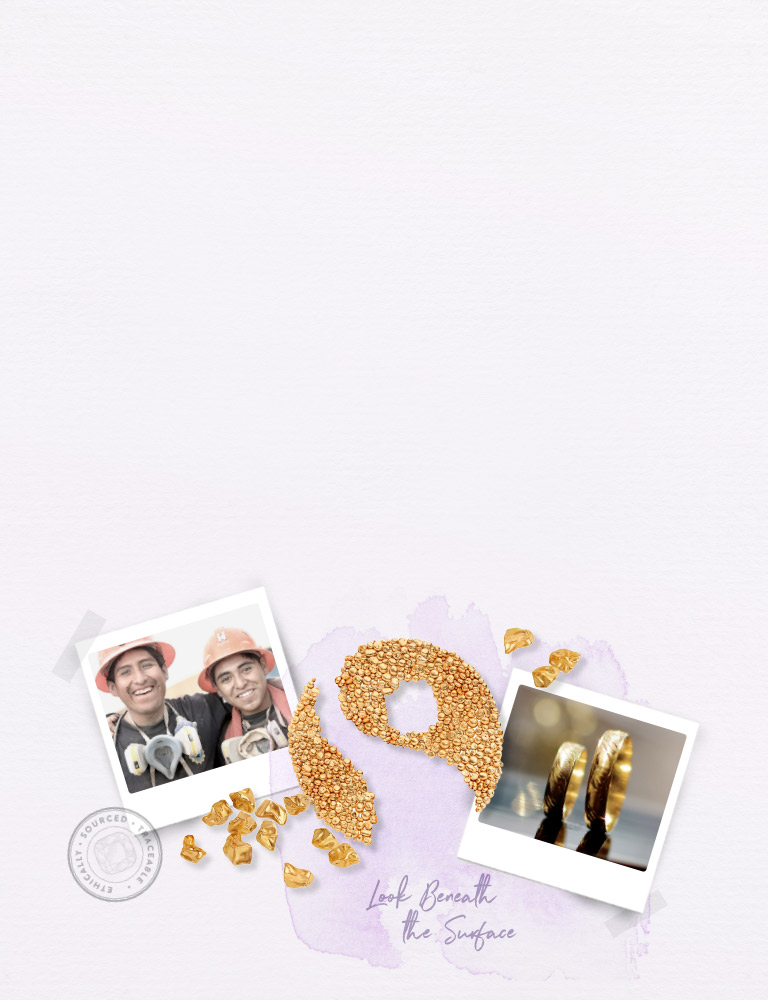 WHY USE FAIRTRADE GOLD?

Globally, nine out of ten wedding rings are made from gold that was mined in artisanal and small-scale mines. In these mines child labour is rife, with unfair pay, dangerous working conditions and the use of cheap chemicals and methods that destroy the environment.

Fairtrade Gold is sourced exclusively from mines which avoid these issues, ensuring your gold does not come at the price of human or environmental suffering.

Gold certified to Fairtrade standards provides small-scale miners and their communities with the opportunity for better living and working conditions. For this reason, Ingle & Rhode is delighted to have been be amongst the first jewellers in the world licensed to offer jewellery made with certified Fairtrade gold.

There are currently four Fairtrade-certified mining organisations in the world: MACDESA, AURELSA and SOTRAMI in Peru, and SAMA in Uganda.

SOTRAMI in the Atacama Desert, central Peru, received Fairtrade certification in 2011. 300 miners work there in a hard-rock mine which tunnels into the side of a mountain and is twelve levels deep. The mine supports about 500 families, and the miners and their families live in nearby Santa Filomena.

Today there are 88 shareholder workers in two groups and an additional 30 self-employed miners working in the mine, plus five engineers who manage the mine and processing plant, and a women’s group.

Although no women work inside the mine, they work on the surface sorting ore for processing. 180 women work in shifts and at the end of each month share the income made between them. There are two groups who work 2pm-6pm daily around childcare demands and domestic responsibilities. These women have also established a crèche so that childcare can be shared and women can work without taking their children to the mine site.

SOTRAMI has recently been given an award recognising their way of working as ‘best practice’ in the ASM sector. Through the Fairtrade Premium the miners have invested in new equipment to increase their productivity, meaning that they now have more gold to sell.

There are about 600 families in the local municipality of Relave. Other mining companies and processing plants, Ballón, Milagros, and Cominsa, provide services for artisanal mining so that not all development activity depends on AURELSA. However, AURELSA provides electricity to the village at a subsidised rate from 6pm to 10pm, and it is often asked to support community initiatives.

The mayor of Relave, who also is AURELSA’s general manager, has been actively involved with other miners in lobbying for and advocating the recognition of rights of artisanal miners and the creation of artisanal mining laws in Peru.

MACDESA, located in the Arequipa region in southern Peru, received Fairtrade certification in 2015. The company, which operates a hard rock mine and processes about 400 tonnes of ore per month, was founded in 2004 through the federation of 478 artisanal miners. Today Macdesa has 388 shareholders, divided into four groups of independent producers. In addition, Macdesa has partnered with other groups of miners, and collaborates with a group of female miners. In all, more than 550 families live off of the Macdesa mine.

The miners at MACDESA work underground in shifts of twenty days on and ten days off. For those miners who do not live locally, these ten day breaks give them time to travel to see family in different parts of Peru.

Other miners have made their home near the mine site in the village of Cuatro Horas, where rising incomes from Fairtrade have played a major role in local development, resulting in the completion of various major infrastructure and social projects, such as the development of an electrical grid and a water supply network, and the establishment of medical services and schools.

In Africa, Fairtrade has been working with nine pilot groups in Uganda, Kenya and Tanzania to achieve Fairtrade certification, in a three-year programme funded by Comic Relief. In October 2016, SAMA in Uganda became the first artisanal small scale mining co-operative in Africa to become Fairtrade certified. The co-operative produces just 5 kg gold per year, but has the potential to significantly benefit many people in the local community, and Fairtrade certification brings much needed hope to the impoverished communities who risk their lives to mine the rich gold seam that runs around Lake Victoria.

How to ensure your ring is ethical?

Brett
Fantastic from start to finish. The shop is located in a beautiful part of London which is easy to get to. Inside the shop itself I felt comfortable and relaxed. Being the first time buying an engagement ring I thought I might feel pressured but that was not the case. After ordering the ring communication was great throughout and delivery was on time. Upon opening the box I was taken aback by the how flawless the ring looked. I was genuinely lost for words. Thanks to all the staff at Ingle and Rhode that helped me pick the most perfect ring.
Tom Gittins
Beautiful, ethical jewellery - can't recommend enough! I am so glad that I found Ingle & Rhode when looking to buy my partner an engagement ring - they are superb, and the products are wonderful. Buying an ethical ring was really important to my partner and I, and so I was immediately drawn in by Ingle & Rhode - unlike a lot of ethical jewellery companies, their rings are still very contemporary.. which was exactly what my partner wanted! I had a couple of calls with Ellie during the process, who was so helpful - despite not having a great idea of what to go for, she was decisive and led me towards my own decisions; highly recommend speaking with the team, because they are wonderful (and lovely people too). Can't recommend using Ingle and Rhode highly enough - my partner loved the ring that I chose, and we would definitely use them again for jewellery in the future.
Mr Runcieman
Excellent process for bespoke engagement ring Excellent process, from start to finish. I emailed to begin the process of designing a bespoke ring. Within 2 days I had an in person meeting to discuss ideas. I was shown some examples and given brilliant advice by Ellie, who I found extremely reassuring throughout. The designer, Hayley, sent me initial sketches 1-2 weeks after the in person appointment. Hayley was very patient and again provided brilliant advice. Hayley was quick to create new design iterations based on my feedback. After many back and forward emails, the design was finalised and CAD mockups were provided. The mockups were extremely accurate when comparing with the finished product. The entire process, from first email to collection, took 6 weeks for a bespoke ring made with recycled platinum and a beautiful pear diamond (which was 2-4 weeks faster than their estimate). Communication was excellent and they were very keen to fit deadlines around plans I had in place. Ring resizing was required (my estimations were 4 sizes off!). I rang to book an appointment for a professional measurement and was able to meet the same day with short notice. The ring is to be collected within 7 working days. Overall the entire process was excellent. I felt very well looked after, very reassured and found all staff genuinely trustworthy. Above all else, my partner loves the ring and we are both extremely happy.
Shepsky
From Russia With Love Cannot express how grateful I am to have ended up using Ingle & Rhode to construct an engagement ring for my now fiancé! I was absolutely clueless how to go about finding a ring but quickly realised I knew what style I wanted and enquired about designing and constructing a ring. From the moment Ellie got in touch she made the whole experience effortless and with Hayley's design help produced drawings of a ring that were exactly what I had pictured - all this achieved via email from an oil rig in Eastern Russia! I received the ring once home and upon opening the box I could not believe Ingle & Rhode were able to turn a few emails into such a perfect and incredible ring that was just a thought I my head only weeks before. We are now very happily engaged and the ring could not mean more to us given the nature of how it came to be and what it now represents. Once again, I cannot thank Ellie enough. All the best Ally
Umang Joshi
Perfection. From the initial meet to the final ring, ever step of the process was incredibly. I surprised my (now) fiancé with a diamond ring and everything was perfect. Would highly recommend to anyone who is looking to get an engagement ring for their partner.