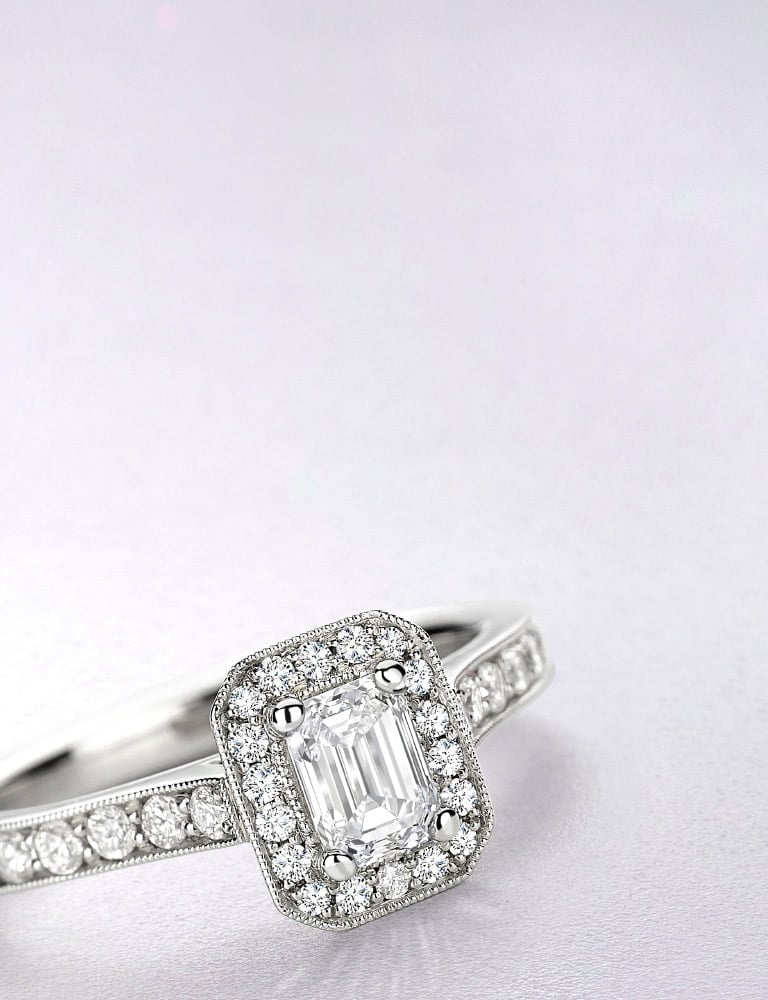 100 items
100 items
Show All
Brett
Fantastic from start to finish. The shop is located in a beautiful part of London which is easy to get to. Inside the shop itself I felt comfortable and relaxed. Being the first time buying an engagement ring I thought I might feel pressured but that was not the case. After ordering the ring communication was great throughout and delivery was on time. Upon opening the box I was taken aback by the how flawless the ring looked. I was genuinely lost for words. Thanks to all the staff at Ingle and Rhode that helped me pick the most perfect ring.
Tom Gittins
Beautiful, ethical jewellery - can't recommend enough! I am so glad that I found Ingle & Rhode when looking to buy my partner an engagement ring - they are superb, and the products are wonderful. Buying an ethical ring was really important to my partner and I, and so I was immediately drawn in by Ingle & Rhode - unlike a lot of ethical jewellery companies, their rings are still very contemporary.. which was exactly what my partner wanted! I had a couple of calls with Ellie during the process, who was so helpful - despite not having a great idea of what to go for, she was decisive and led me towards my own decisions; highly recommend speaking with the team, because they are wonderful (and lovely people too). Can't recommend using Ingle and Rhode highly enough - my partner loved the ring that I chose, and we would definitely use them again for jewellery in the future.
Mr Runcieman
Excellent process for bespoke engagement ring Excellent process, from start to finish. I emailed to begin the process of designing a bespoke ring. Within 2 days I had an in person meeting to discuss ideas. I was shown some examples and given brilliant advice by Ellie, who I found extremely reassuring throughout. The designer, Hayley, sent me initial sketches 1-2 weeks after the in person appointment. Hayley was very patient and again provided brilliant advice. Hayley was quick to create new design iterations based on my feedback. After many back and forward emails, the design was finalised and CAD mockups were provided. The mockups were extremely accurate when comparing with the finished product. The entire process, from first email to collection, took 6 weeks for a bespoke ring made with recycled platinum and a beautiful pear diamond (which was 2-4 weeks faster than their estimate). Communication was excellent and they were very keen to fit deadlines around plans I had in place. Ring resizing was required (my estimations were 4 sizes off!). I rang to book an appointment for a professional measurement and was able to meet the same day with short notice. The ring is to be collected within 7 working days. Overall the entire process was excellent. I felt very well looked after, very reassured and found all staff genuinely trustworthy. Above all else, my partner loves the ring and we are both extremely happy.
Shepsky
From Russia With Love Cannot express how grateful I am to have ended up using Ingle & Rhode to construct an engagement ring for my now fiancé! I was absolutely clueless how to go about finding a ring but quickly realised I knew what style I wanted and enquired about designing and constructing a ring. From the moment Ellie got in touch she made the whole experience effortless and with Hayley's design help produced drawings of a ring that were exactly what I had pictured - all this achieved via email from an oil rig in Eastern Russia! I received the ring once home and upon opening the box I could not believe Ingle & Rhode were able to turn a few emails into such a perfect and incredible ring that was just a thought I my head only weeks before. We are now very happily engaged and the ring could not mean more to us given the nature of how it came to be and what it now represents. Once again, I cannot thank Ellie enough. All the best Ally
Umang Joshi
Perfection. From the initial meet to the final ring, ever step of the process was incredibly. I surprised my (now) fiancé with a diamond ring and everything was perfect. Would highly recommend to anyone who is looking to get an engagement ring for their partner.

CAPTURING THE ELEGANCE AND ROMANCE OF A BYGONE AGE

In the context of engagement rings, the term ‘vintage’ means different things to different people, but we define vintage engagement rings to be those that are typical of the Edwardian and Victorian eras. Vintage-style engagement rings are typically ornate in design, and capture the elegance, romance and quality of these bygone eras. And more than a century after they first became popular, these striking designs are fashionable once again — testimony to the enduring style and beauty of these stunning rings.

The Victorian era was marked by discoveries of gold and diamonds in South Africa, and these finds had a direct impact on the jewellery of the time, helping to make fine jewellery accessible to the middle classes that had emerged from the Industrial Revolution.

Early Victorian engagement rings tended towards the large and more ornate, but later the fashion was for smaller and finer pieces, with gemstones being displayed in increasingly intricate and varied settings. This era also saw the the height of the Art Nouveau movement, inspired by the elaborate curves and free-flowing forms found in nature – a direct reaction against the age of industrialisation.

The metal of choice for engagement rings throughout the Victorian period was 18ct gold, and until 1854 only 18ct gold was hallmarked in Britain. Thereafter, 9ct, 12ct and 15ct gold was allowed to receive a quality stamp too, paving the way for cheaper jewellery.

Of the precious gemstones, opals were one of Victoria’s personal favourites, but coral, turquoise, pearls, garnet and amethyst were also favoured for use in Victorian engagement rings. However, diamonds became increasingly popular in the latter part of Victoria’s reign, after large deposits were found in the 1860s and their affordability improved. The advent of electric lighting in the 1880s probably also helped by showing off diamonds’ sparkle to best effect!

The death of Queen Victoria in 1901 was followed by the reign of her son, King Edward VII, who died in 1910. The Edwardian era witnessed the development of new technologies such as the car, the aeroplane and the cinema, and importantly for jewellery, the invention of the oxy-acetylene torch, which made it far easier for jewellers to work with platinum.

Coloured gems experienced a resurgence in popularity during the period, with sapphires often being used as the main gemstone for engagement rings, and small diamonds being used for decoration.

The jewellery of this era matched the spirit of the ‘Belle Epoque’ – elegant, feminine and delicate, to complement the silk dresses and feathered hats of the time. This really was the ‘Beautiful Era’.

In the gallery above, you can view a selection of some of the bespoke vintage-style rings that we’ve made to order for previous clients. Alternatively, you may wish to browse our Engagement Ring Collection for the vintage-style rings that we have in stock. The vintage style of ring often features the halo of gemstones around a centre stone, you can view all of our halo engagement rings online here.

Please feel free to get in touch if you have any questions, or to discuss commissioning your own bespoke design. 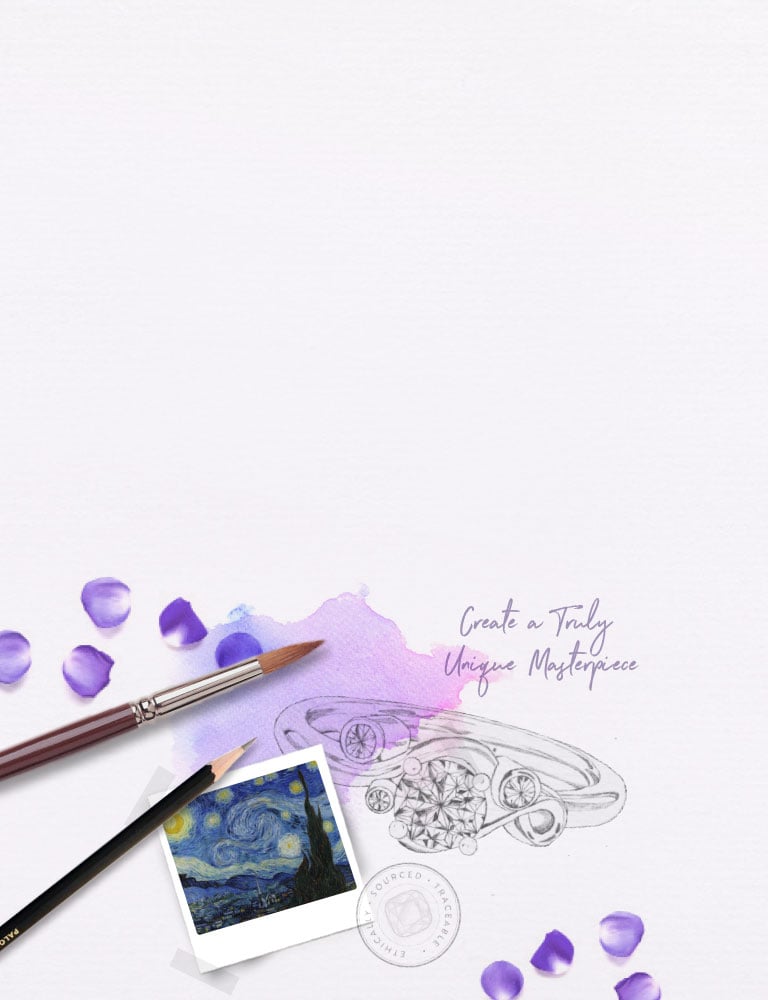